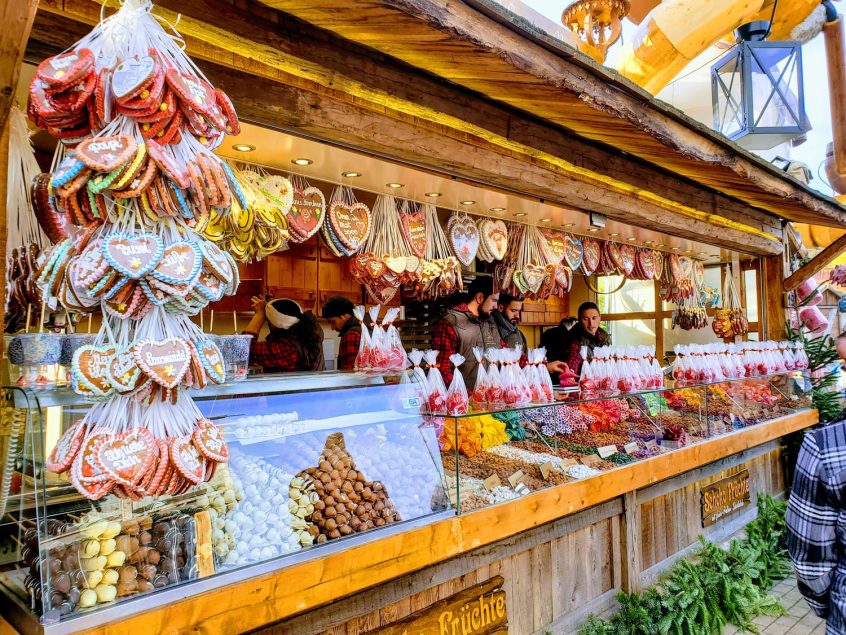 The next day it was time to drive to Eindhoven to visit dad. And after that to our friends Volker and Martina in Bottrop, Germany. One thing on the agenda for that weekend was to visit our first Christmas market at the CentrO mall in Oberhausen!

After breakfast we drove to Eindhoven where my dad lives. Of course it was a happy reunion. We were stunned by how good he was looking! Even better than last year on his 100th birthday! His complexion was good and he didn’t lose any weight. He didn’t even seem to have issues anymore with getting out of breath. I think he’s liking the (low-sodium) food they are feeding him in the home 🙂

We’d be visiting him several times on this trip. So after a little while we left him to continue our drive to Germany. We had learned we would need an Environmental Sticker for some of the cities in Germany we planned to drive to. I had read that we could get these at gas stations in Germany and the rental agency confirmed that. Once we got off the highway in Bottrop, we stopped at a gas station to ask, but they sent us to a dealership nearby for more information. They couldn’t give these out for foreign licence plates, so we got sent to a TÜV agent (a local inspection station), but it was closed by now! Well, on to Volker, Martina and their daughter Johanna then for now.

We figured the chance of getting checked for that sticker in a quiet street had to be really really small. And what could we do at that point anyway? Volker was even surprised that foreigners need that sticker. He said that hardly any of the many Dutch people visiting the famous CentrO Mall in Oberhausen have it. We abandoned the issue for the night and went to eat out at a Greek restaurant, yum!

The next morning Volker and Nico went to this TÜV agent, but there they refused to help. The reason was that Nico didn’t have the original car papers. After calling the car rental helpdesk at Hertz, he learned that they were supposed to give us extra papers if we’d made it known that we’d be going abroad and would need to apply for this sticker, which we did. All they could do now, was email a copy of these papers.

But by then we were fed up with all this and decided to leave it until we would go to Aachen, where we would need that sticker again. Here in Bottrop, we wouldn’t be driving in our car until we’d have to make the short drive back to the highway the next day. The helpdesk lady said we should complain to Hertz about having to waste hours on this issue. We did after the trip and they immediately came back with an apology, reimbursed the cross border fee plus 75 euro extra for lost time! Thank you for a timely and positive reaction, Hertz!

Back to our plan for the day… the Christmas market at the CentrO mall in Oberhausen. We went during the day as it would be way too busy in the evening. We enjoyed visiting the stalls and I had my first Glühwein (hot, mulled wine)! Back at the house we’d have chili and spent the evening watching metal videos with friends.

Winters are long in Saskatchewan, so as soon as it finally warms up in May, we want to go camping in our ol' Tioga 30' motorhome! Mostly for weekends in our beautiful provincial parks, sometimes visiting friends and sometimes for longer trips.